Snow all around you, while you are wrapped in all kinds of warm clothing... the wind hitting your face.. chilling whatever part of your body is exposed.... :) Its fun. 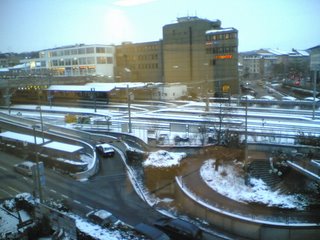 Then there were these small little trips through the market place..all covered with snow. Everything was white. Literally everything.

To add amazement to fun, there was a meeting planned in a meeting room on fifth floor. And, the room had big windows facing the market area. When someone looks out from that window, there is still the same old city, but all the colors are gone. Its just one universal color all over the place. ALL WHITE. 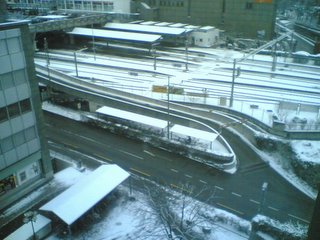 I took many photos. Some with my SLR, some with my phone.. Can't upload them now, but yeah, they will show up.. for sure.

We went to one of the indian restaurants which Manoj had be-friended on his last trip here. The walk to the place was fabulous. The footpath was full of snow, like a blanket. The little gardenetts/bushes along the footpaths were all topped by snow. About two-three inches of that.

Some of these places turned out the be pretty dangerous. Snow had been crushed by walking people and some of it had become ice. A thin layer, but very slipperty to step on. If you are unlucky and step onto one of these patches, be very careful. I just about fell into one of these traps.

On another day, we went walking through the city center to the other part of the town. That part is rather sparsely populated and therefore, its more parks, open areas, greenery etc. And, to watch it in snow was just amazing. Lots of photos again.

Later in the week, the snow fall stoppd, but the snow on the streets remained still. Its still there (its the third day since snow-fall stopped). Temperature is not going up and therefore, the snow is not going away so fast. Though its reducing...

On the friday today, streets are more or less clean of snow, howeverm some plants, treetops, and standing cars in parking still have inches of snow on them. the temperatures are not going up more than a degree or two. Lately I found that we experienced things in the range of -5 to -6 degrees celcius.